Warehouse 9 was the 9th incarnation of the Warehouse which was housed by the Ottoman Empire underneath the city of Constantinople, Turkey.

It was inducted by Warehouse 8 Regent Reinhard Schmidtke on February 17th, 1450 and was finished on September 9th, 1517.

In spite of it's relatively short history, a total of three Caretakers were used for Warehouse Nine:

Warehouse 9 was designed in the modern style of Ottoman architecture atop a hill overlooking Constantinople. It featured an outer courtyard surrounded by a vaulted arcade. The central dome of the building marks the circular maze below which housed the majority of artifacts in the Warehouse. The entire structure (central building, turrets, and courtyard) was fortified by a 50 ft stone wall which acted as the first line of defense against intruders. Artifacts were embedded in the wall for added protection.

Primary entrance to the Warehouse was secured by a voice activated door. Designed by Leonardo da Vinci, only the phrase "Iftah ya simsim" ("Open Sesame" in Arabic) could unlock the door and allow access to the Warehouse. Word of the seemingly magical door, utilizing artifact integration, eventually spread and became mythicized by the public in the form of a story: "Ali Baba and the Forty Thieves". At an unspecified later date, the door was moved from a decommissioned Warehouse 9 and placed as a secret exit to Warehouse 13 in South Dakota, USA. 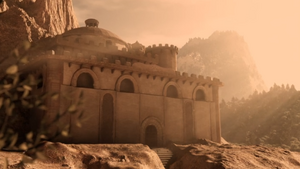 List of main contributors to the building of Warehouse 9:

The 9th iteration of the Warehouse was only located in the Ottoman empire until the death of Suleiman the Magnificent, a period of great cultural improvement. Although the exact location is unknown, it is likely the Warehouse was located in Constantinople (now called Istanbul), the Imperial seat of the empire.

During its tenure, Warehouse 9's Caretaker, a previous Regent of Warehouse 8, Paracelsus, was the first caretaker ever to be prosecuted by the Regents and eventually Bronzed indefinitely, due to his crimes of homicide and unsanctioned experimentation with artifacts to gain immortality. The sudden attempt to seize the Warehouse's power via time travel and attempted assassination of the Regents led to his second incarceration by Bronzing. Having unsettled the Regents, they began to discuss the notion of moving the Warehouse despite instating a new Caretaker. These events began a slow process of moving the Warehouse, not solidified until the death of Suleiman the Magnificent in 1566.

Death of Suleiman the Magnificent

With the death of Suleiman, the empire began to suffer political and military stagnation, and despite it being a prominent cultural center for hundreds of years after his death, the Regents moved the Warehouse yet again.

Community content is available under CC-BY-SA unless otherwise noted.
Advertisement