A pair of two black Victorian era top hats with one monogrammed with the initials WG for Gilbert and the other one with AS for Sullivan. 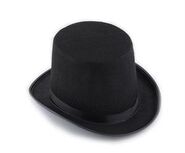 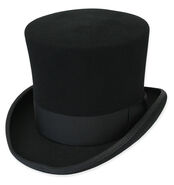 Sir William Schwenck Gilbert and Sir Arthur Seymour Sullivan, also known as Gilbert And Sullivan, were Librettist and Composer respectively. Together they produced 14 comic operas, some of them are quite well known, including The Mikado, H.M.S. Pinafore and The Pirates of Penzance.

Allows the two wearers to communicate with each other telepathically. There will be no barriers between the two unless a wearer decides to create one. Over time, the user's separate minds will combine into one entity composed of facets of each personality.

Retrieved from "https://warehouse-13-artifact-database.fandom.com/wiki/Sir_William_Schwenck_Gilbert%27s_%26_Sir_Arthur_Seymour_Sullivan%27s_Top_Hats?oldid=98860"
Community content is available under CC-BY-SA unless otherwise noted.