The Mars Climate Orbiter was a robotic space probe launched by NASA in December of 1998. On board was a land surveyor meant to analyze the Martian atmosphere and climate alongside the orbiter. However, communication with the orbiter was lost and its trajectory pulled too close to Mars, disintegrating in the upper atmosphere. The cause of this crash was an error in part of the software. Instead of being measured in the standard metric system, an outside contractor had placed measurements for the navigational software in US standard instead. 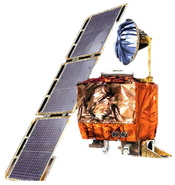 Causes all forms of unit measurement to switch between US standard and the metric system. It converts all numbers, whether they are in a digital, analog or written format. To affect non-electronic numbers, a glowing mass of energy making computer clicks and beeps will exit the containment unit. Any electronic devices affected by it will malfunction until unusable.

Since it is an artifact that cannot normally be physically interacted with, the strings of code itself where trapped within a specially crafted biomechanical unit. With no data, the code cannot convert any programming systems. Being made out of an organic and mechanical composite allows the code to remain in place but unable to leave, trapping it inside.

Retrieved from "https://warehouse-13-artifact-database.fandom.com/wiki/Navigational_Software_from_the_Mars_Climate_Orbiter?oldid=96541"
Community content is available under CC-BY-SA unless otherwise noted.