In founding the Ahmadiyya branch of Islam, Mirza Ghulam Ahmad established himself as a force of renewal for the religion. At its core was a focus on ‘’tawhid’’, upholding God is an absolute entity accessible to all followers, not some. Also embraced is the belief Jesus survived the crucifixion and travelled east for a natural life in the Kashmir. Many Christians and other Muslim groups furiously detest Ahmadiyya worshippers for this specific reason.

Ahmad's support for Islam consisted of lectures, texts, arguments for peaceful cooperation and spiritual debates with opponents. Several times he challenged naysayers to prayer duels to demonstrate who was truly devoted to their belief. Most refused. Others backed down from their claims of being holy messengers and gods incarnate.

Allows the dual activators to unshackle their spirit and wander around freely, interacting unseen with the world around. Stronger wielders can amplify someone's conscience and slide it closer towards the user's values. Powered by faith, meaning unshakeable belief provides the finest control.

The affected can inhabit both their astral and physical forms at once without harm. Separated users can also split apart opponents, facing them in the incorporeal realm. All that can be done is argument - forcing the duo to disagree until fair concessions are made. Spending time within this state weakens the physical body until it is too weak to move unassisted. 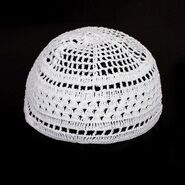 Add a photo to this gallery
Retrieved from "https://warehouse-13-artifact-database.fandom.com/wiki/Mirza_Ghulam_Ahmad%27s_Topi_Taqiyah_and_Charpai?oldid=95727"
Community content is available under CC-BY-SA unless otherwise noted.