Louis Le Prince was a French inventor who shot the first moving pictures on paper film using a single lens camera. He has been heralded as the "Father of Cinematography" since 1930. Le Prince’s work predates the inventions of Thomas Edison and the Lumière Brothers by years. He was unable to demonstrate his invention in the United States because he disappeared September 16, 1890. No body or luggage were ever found and Edison later tried to claim rights over the invention.

Taken from Le Princes workspace, it was used by Edison in the Warehouse. Installed in the Projection Room, it acted as a transformer in the early days of Warehouse 13 for information recording artifacts before the advent of superior technologies.

Records the users thoughts and projects them. Visual and auditory images they imagine of concepts and memories will also be displayed. Continuous use will result in the user becoming imprinted onto the recording/projection medium of their thoughts. They will become inert and effectively non-alive while trapped. Medical resuscitation is immediately required; otherwise they will fade back. 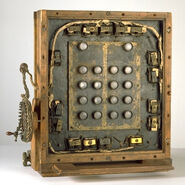 Internal mechanism
Add a photo to this gallery
Retrieved from "https://warehouse-13-artifact-database.fandom.com/wiki/Louis_Le_Prince%27s_Camera?oldid=92857"
Community content is available under CC-BY-SA unless otherwise noted.