On September 10, 1945, farmer Lloyd Olsen of Fruita, Colorado, United States, had his mother-in-law around for supper and was sent out to the yard by his wife to bring back a chicken. Olsen chose a five-and-a-half-month-old cockerel named Mike. The axe missed the jugular vein, leaving one ear and most of the brain stem intact.

Despite Olsen's botched handiwork, Mike was still able to balance on a perch and walk clumsily; he even attempted to preen and crow, although he could do neither. When the bird did not die, a surprised Mr. Olsen decided to continue to care permanently for Mike, feeding him a mixture of milk and water via an eyedropper; he was also fed small grains of corn. It is not recorded what was eaten for supper that night.

When used to his new and unusual center of mass, Mike could easily get himself to the highest perches without falling. His crowing, though, was less impressive and consisted of a gurgling sound made in his throat, leaving him unable to crow at dawn. Mike also spent his time preening and attempting to peck for food with his neck. 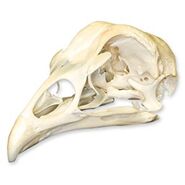 When the skull is held, it negates any pain the user feels. The pain is stored in the axe. Every time the skull is used, the axe must be "flushed" by carefully separating the handle and axehead. The stored pain escapes as raw energy.

Retrieved from "https://warehouse-13-artifact-database.fandom.com/wiki/Lloyd_Olsen%27s_Axe_%26_the_Skull_of_Mike_the_Headless_Chicken?oldid=96490"
Community content is available under CC-BY-SA unless otherwise noted.