Juan and Aden Taylor participated in a Sburb session, which granted them their powers over Time and Space respectively. A month after Aden joined the Warehouse team, Juan suffered an encounter with Gloria Von Dichi, leaving him knocked out for several days in his house.

After recognizing the specific pair of Sburb Beta Disks left in Portugal, Aden realized something was wrong with his best friend and immediately left to New Mexico, where he woke him up. After a brief tussle with Von Dichi's maid, Juan was teleported to the Warehouse.

Juan learned about the Warehouse on his own, explaining to Mr. Kosan about his own skills and going into detail about his chronokinetic abilities.

Juan is generally friendly and nice to be around. However, Juan can also be easily irritated, and has no time for anyone who distracts him from his current goal.

Juan is open about which way he swings sexually, often saying he is "as straight as a rainbow." But after his attraction to his own gender, Juan loves to fiddle with old watches and clocks, a habit he developed post-SBURB. He also enjoys snarking with fellow Agents, Aden in particular.

Juan's mental state is actually fairly fragile, even for the already-unstable God Tiers. He suffers from depression, but tends to conceal it. He also has thanatophobia. Death scares him a lot, despite his Norse beliefs.

As mentioned, Juan is neopagan, and worships the Norse gods.

Juan deeply regrets the death of his childhood friend Morty. A small accident with Houdini's wallet lessened this regret some.

Juan is the Spanish form of "John". The name means "God is Gracious". Horado means "keeper of time", and is also a Spanish word for Time.

Juan is cautious around artifacts, rarely employing their use. 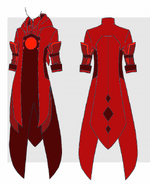 Juan's "Coat Tier" outfit, which he uses for dramatic appearances.

Juan's effects, including his bracelet, a key necklace, and a fidget spinner ring.
Add a photo to this gallery
Retrieved from "https://warehouse-13-artifact-database.fandom.com/wiki/Juan_Horado?oldid=100465"
Community content is available under CC-BY-SA unless otherwise noted.