Jerry Siegel was a comic book artist who worked alongside Joe Shuster to create Superman, the first great comic book superhero and one of the most recognizable. They sold the character rights to the precursor of DC Comics for $130. This low price buyout of a now famous character has led Siegel and Shuster to suing for compensation multiple times. They received $30,000 a year and had all media involving Superman credit them as the creators, which continues today.

It can increase the readers’ strength but decreases brain activity. The user can be taken advantage of easier during this state. 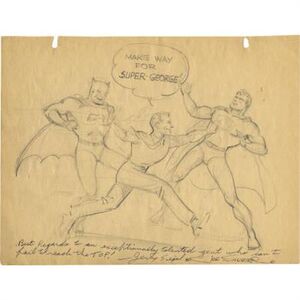 Retrieved from "https://warehouse-13-artifact-database.fandom.com/wiki/Jerry_Siegel%27s_Sketchbook?oldid=90674"
Community content is available under CC-BY-SA unless otherwise noted.