Edwin Armstrong (December 18, 1890 – February 1, 1954) was an electrical engineer who first created the regenerative circuit, which amplified radio signals by looping positive feedback to keep the signal strength stable. Under high amplitude, any vacuum tube could transmit its own wireless waves. During a trial, he accidentally created the superheterodyne circuit, an even more juiced up amplification hardware that he sold to RCA for a small fortune.

Static interference from thunderstorms and the equipment itself made early machinery sound very garbled on the receiving end. Using frequency modulation (FM), Armstrong made circuits that changed the number of waves a station sent out versus increasing power. Slightly altering the broadcast frequency created between signals created carrier waves devoid of any crackling. AM radio could not boast the same clarity or signal strength. New channels were created at the high and low spectrum ends to fulfill the growing amount of television, radio and communication networks. He finally solved the problem of static interference on amplitude modulation (AM) systems by changing the signal frequency, pioneering the field of FM transmissions.

Most of his business agreements worked with smaller companies for a 2% royalty fee to access the technology. In turn, many copyright lawsuits and patent infringements were lobbied by radio innovators Lee de Forest and David Sarnoff, many of which Armstrong lost. Introducing costly AM infrastructure was more appealing than converting systems to FM for cheap, or defuncting all their ongoing signal operations. Much of his later life was spent near broke in court arguing for his systems. He later jumped out a window after attacking his wife during another litigation period.

When installed in an FM-enabled device, it removes any muddled noise or interference. Every syllable is clearly sounded and for digital data transmissions, encoded. No static is possible, only the message. Causes movement from the original frequency. Signals shift into nearby bandwidths, causing the device to need continual refinement to receive all the instructions. 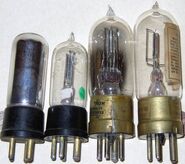 Knobs
Add a photo to this gallery
Retrieved from "https://warehouse-13-artifact-database.fandom.com/wiki/Edwin_Armstrong%27s_Radio_Parts?oldid=100886"
Community content is available under CC-BY-SA unless otherwise noted.