A Cold War warning system developed to give the United States ample warning if Soviet aircraft ever passed over the North Pole for a military strike. Several similar systems came beforehand but had difficulty discerning between enemy bombers and large flocks of birds. Constructed several hundred kilometers above the Arctic Circle, military installations popped up in Canada, Alaska, Greenland and Iceland. Many were American or Canadian Air Force members who received instruction from Bell Telephone, had their outposts built by Western Electric and supplies shipped in by arctic pilots and sea captains. During development contractors toiled in bitter cold, freezing wind, constant snow and unending darkness.

The line itself consisted of small in-between stations checked every few months mixed with larger posts hosting more of the crew members. One of the few reliable ways they could communicate through the conditions was with a system of giant parabolic reflectors, allowing one post to signal another through blizzards. Although basically duds against ICBMs and submarine attacks, their location would have provided enough time to prepare for nuclear enhanced airstrikes.

Many Canadians regarded the installation as non-ideal, but also necessary. The people began to place greater importance on their frozen wilderness and cemented the shift when full Canadian control was given to the program after the Soviet Union collapsed and the Americans relinquished command.

Enables detection of any enemy aircraft or warship over home territory, no matter the cloaking or maneuvers. Releases unbearable cold, high winds and heavy snow drifts when a combatant is located.

When its abilities were transferred over to the North Warning System in 1993, the Warehouse utilized several of the outposts. By syncing the structures to a central network of anomaly and danger detecting artifacts, Warehouse 13 became prepared for artifact related threats appearing on their northern borders.

The following artifacts have been removed from the Warehouse and integrated into the remote warning system. 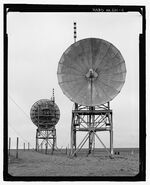 Line locations across Canada
Add a photo to this gallery
Retrieved from "https://warehouse-13-artifact-database.fandom.com/wiki/Distant_Early_Warning_Line?oldid=89441"
Community content is available under CC-BY-SA unless otherwise noted.