Damascus steel was a high-quality type of steel produced in the Middle East prior to the 18th century. The original methods were lost long ago and it is only in recent years that equatable steel has been manufactured with the used of carbon nanotubes. Damascus steel was known to be tougher, more resilient and required less care than other types of steel and were in high demand.

The forge stored in the warehouse consists of a furnace, anvil, coal pit and trough, as well as several tools.

Using the forge is a dangerous task, as is bestows no ability or knowledge on the forging process. What it does do is amplify existing talent, allowing smithed items to be created far stronger, sharper and generally higher quality than most other similarly made items. Without a decent amount of pre-existing skill, produced steel will be no better or worse that average material.

The embers from the forge glow with a pale blue instead of yellows and red, and do not appear to require fuel. 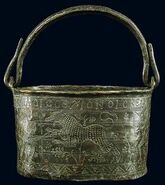