Carl Laemmle was a pioneer in the early days of the American film industry. He founded one of the original major Hollywood studios, Universal, and was involved in over 400 separate films. A German immigrant, he began buying nickelodeons (movie and store centers) after he moved to New York, which was expanded into a film distribution company.

Whole shops and film venues comprise the artifact, which means they can act either independently or in unison. Each place is filled with some form of entertainment, whether vaudeville comedy and arcade games to freshly made sweets. Payment of a nickel or dime is required for any section to activate. These activities will keep the visitors enthralled and happy until they leave to return home.

When a section is ignored or overlooked, they will try to compensate by invading the user’s life. Lights and sounds will turn more carnival, stuffed toys will suddenly surround serious business meetings and film programs will constantly appear on every screen. 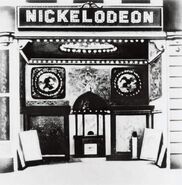 Add a photo to this gallery
Retrieved from "https://warehouse-13-artifact-database.fandom.com/wiki/Carl_Laemmle%27s_Nickelodeon?oldid=96494"
Community content is available under CC-BY-SA unless otherwise noted.